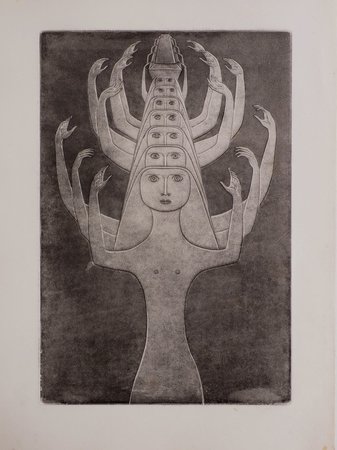 FIRST EDITION, SIGNED BY PRINNER. A SUPERB BOOK OF THE DEAD BY AN IMPORTANT TRANSGENDER ARTIST, habitually addressed by his friend Picasso as ‘Monsieur Madame’. A spectacular large-format engraved book—the text being burin engraved throughout by Anton Prinner. The text is drawn from the translation by Pierret after the Turin papyrus. It was published with the assistance of Robert J. Godet, who died shortly afterwards: Prinner signs on his behalf ‘pour J. Godet +’.

‘Anton Prinner, who was probably born Anna Prinner but lived as a man throughout his life, studied painting at the Budapest school of fine arts in 1920 and went to Paris in 1928. He then gave up painting for a while and studied occult sciences, esoteric doctrines and mystical philosophies... During the wartime German occupation of France, Prinner went into hiding, living in a squalid garret... He was an intriguing and enigmatic character, who lived a solitary and reclusive life, and the chronology of some stages of his work and life remains obscure.

When Prinner resumed painting in 1932 after his occult studies, he was much influenced by Mondrian's Neo-Plasticism and by Russian Constructivism. At that time, he also learned print-making, working in Atelier 17 in Paris with Stanley William Hayter. After his Constructivist period, which lasted from 1932 to 1937, he worked on low relief and then high relief sculpture, a medium always favoured by Constructivist artists. At some time, perhaps around 1939, he took up sculpture in the round, producing Woman with Braid. The technique of sculpture, or rather its internal logic, brought Prinner back to Figurative art.

During the German occupation, hidden away in his garret, Prinner devoted himself to drawing meticulous still-lifes of everyday objects in pen and ink. When he returned to sculpture, it was with the intention of creating works that would mediate with the occult forces which had preoccupied him... The composite creatures that emerge from his personal or esoteric obsessions, with their suggestions of aberrant nature, can also recall the work of Jean Arp.

From 1947 to 1949, Prinner worked on 66 etchings and dry-point illustrations for the Egyptian Book of the Dead, as well as a series of low reliefs on the same theme, which he exhibited in 1948...

Number 133 of 200 copies on Rives Royal, (there were a further 10 examples on Japon séculaire, with an original drawing, 7 for collaborators on papiers divers. Total edition 217).