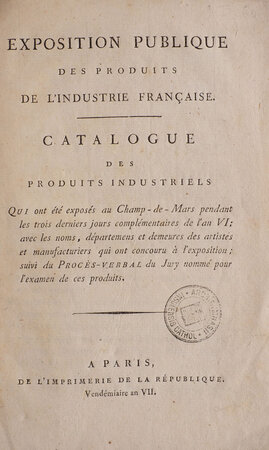 The very rare catalogue for the first exhibition of industrial products, held in Paris in 1798, the forerunner of the great universal exhibitions of the following centuries.
Organised by the Minister of the Interior, François de Neufchâteau, with a view to ‘offering a panorama of products from the different branches of industry in order to encourage emulation’ this was the first great exhibition held in France. Its origins went back to the previous year and the initiative of the Marquis d’Aveze, who visited the factories of Sèvres, Gobelins and Savonnerie and was appalled both at the starving condition of the workers and at the superabundance of exquisite luxury goods with insufficient commercial outlet. With Neufchâteau, he arranged for an exhibition to be held at the Chateau de St Cloud but on the very day selected for the opening (18th Fructidor 1797) the Directory sent out its decree for the expulsion of the nobility — the Chateau de St Cloud was occupied by a company of dragoons and the Marquis expelled. The exhibition eventually took place the following year at the Chateau d’Orsay and on the Champ-de-Mars (on the spot where the spoils of the Italian campaign had been exhibited six weeks previously) and in a series of sixty arcades designed by David in fashionable Grecian style. Sixteen departments and 110 exhibitors were represented and as a note at the beginning of the catalogue explains, the number would have been even greater but for the speed with which the exhibition was organised, which made it impossible to get word to more distant departments of the country in time. It was a great success and the decision was taken to hold it annually.
The pamphlet sets out the list of exhibitors and is followed by the statement of the Jury given on the 5th Vendemiare, a list of the twelve firms singled out for particular distinction by the jury, and a further list of another twelve firms meriting an ‘honourable mention’. The jury consisted of Vien, Gallois, Darcet, Chaptal, Mollard, Moitte, Gilet-Laumont, Duquesnoy, Ferd and Berthoud. It sets out its criteria clearly: the key merit of any work is the invention and its principle appeal in public terms is its utility. In the context of ongoing hostility with Britain, it is interesting to see that the jury confesses a preference for those products which rival or outshine their British counterparts. A couple of firms which did not choose to exhibit are nonetheless singled out for mention in the address: Boyer Fonfrede, a textile merchant, Didot jeune, the publisher, and Delaître, a cotton weaver. The prize winners included firms of international repute, such as Breguet, the clock maker, Lenoir, inventor and maker of mathematical instruments, and Conté, an engineer who first applied machine-ruling to engraving. Having made known its decision to hold the exhibition on an annual basis in future, the address concludes with resounding praise for the new face of France, delivered by the Revolution from subservience to its neighbours and slavery to ‘routine’, the enemy of all true art. Rare: no printed copy listed in the holdings of the Bibliothèque nationale (which has a manuscript transcription) and only 3 copies known in libraries in France. Worldcat lists copies at Yale, Northwestern, Oregon and the British Library. Sandoz and Guiffrey, Arts appliqués et industries d’art aux expositions, 1912, pp. 1-5; Douyere-Demeulenaere, Expositions publiques des produits de l’industrie francaise, Répertoire méthodique, 2008.