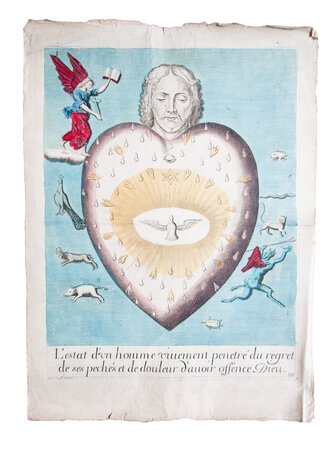 An exceptional (and exceptionally rare) seventeenth-century devotional image depicting the battle in the heart between good and evil. This is an emblem of repentance in which the male subject looks down in tears upon an enlarged heart, in which the dove of the holy spirit is surrounded by tongues of fire and tears and personifications of the vices are driven outwards: a peacock (pride), ram (luxury), pig (gluttony), tortoise (sloth), leopard (anger), snake (envy) and a toad (avarice). An angel presides at the top left bearing a bible and crucifix, while the devil flees to turns his back and flees to the bottom right. It is one of twelve illustrations on the States of Man (or, Tableaux énigmatiques ou d'Images morales) conceived by the Jesuit Vincent Huby (1608-1693) for use in religious retreats and published in Paris in 1682 by Pierre Gallays.

These large printed placards were used specifically for instruction at week-long Jesuit retreats for lay-people. They were exhibited singly or in pairs, while an instructor explained the significance of the emblem. ‘The arguments dealt with the phases of the spiritual life—and its dangers—based on concrete examples taken from everyday life. The order of presentations varied with the director of Exercises. Those relating to the good and paradise were often presented early in the week; sin, attrition, contrition, penitence, a good death, and paradise, while warnings against slackening, relapse, a bad death and hell were addressed towards the week’s end’. (Silvia Mostaccio. ‘Shaping the Spiritual Exercises: the Maisons des retraites in Brittany during the Seventeenth Century as a Gendered Pastoral Tool.’ Journal of Jesuit Studies 2, 2015659-684).

According to Huby’s account of his excercises, ‘Using these placards is extremely helpful... they make the verities we want to make known more sensible and the impression is that much stronger and more easily made than if they only heard it. Everyone is quite gratified, the savants as well as the ignorant’ (La Retraite de Vennes ou la façon dont la retraite des hommes se fait dans Vennes, sous la conduite des pères jésuites, et les grands biens que Dieu opère par elle. 1678, trans. Mostaccio).

Huby’s spiritual method was specifically developed for the Jesuit’s missionary activity in Brittany (La Retraite was published first in Vannes) but the engraved placards were printed in Paris by Gallays, notable for other popular prints and almanacs (the engraver’s name is not recorded). Though the complete set of twelve plates is known from Huby’s instructions, no complete extant set has been located and the Bibliothèque nationale holds only a single print. This example is number 3 (numbered at foot). Huby also devised a series specifically for women (also exceptionally rare); his method became popular and his manual reprinted several times, while the imagery of the placards found its way into numerous books of emblems and later devotional paintings. cf. Images du Grand Siècle: l’estampe française au temps de Louis XIV (1660-1715), Bibliothèque nationale, 2015, 77 (single image ‘L'estat d un homme dans le quel le Diable estant rentré victorieux’)