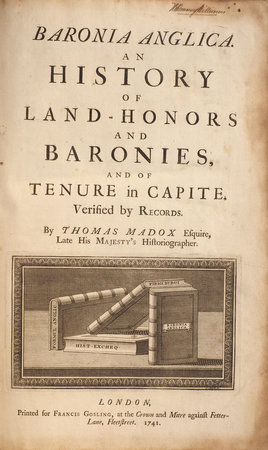 MADOX, Thomas. ~ Baronia Anglica. An History of Land-honors and Baronies, and of Tenure in capite. Verified by Records. London: for Francis Gosling, 1741.

An eighteenth-century work on feudal barons and the history of land ownership in England. It was written by Madox, a legal antiquity and historian whose first appearance was in the publication Formulare Anglicanum in 1701. He produced a learned dissertation on ancient charters, which was praised by Bishop William Nicolson as having provided an ‘unspeakable service to our students in law and antiquities.’ (English Historical Library, 1776).

Baronia Anglica was first printed in 1736 and our issue is ‘a reissue of the sheets of the 1736 edition printed by William Bowyer (T97064), without the index to his ‘History of the Exchequer’ (which occupied the final 54 sheets...) with a cancel title page; Bowyer also printed the new titles; his records show 500 + 50 [large-paper?] + ‘500 more to give away’. The large-paper copies may show variation in placement of press figures, or in their presence or absence; the details are unclear’ (ESTC).