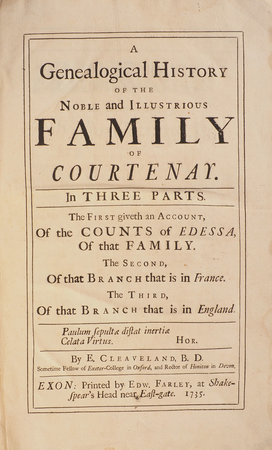 CLEAVELAND, Ezra. ~ A genealogical History of the noble and illustrious Family of Courtenay. Exeter: Edward Farley, at Shakespear’s Head, 1735.

Folio (346 × 210 mm), pp. viii, 307, [1], 32, plus 12 letterpress genealogies (one folding). Some browning, mostly towards the end. Several later engraved plates and a manuscript leaf of notes inserted. Contemporary half vellum, later covered with a paper wrapper (which is rather torn). Early bookplate of Charles Courtenay, later plates of J. H. Hutton and Cecil Humphery-Smith, small portion ct from head of front free endpaper. A good copy.

First edition. An account of the Courtenays of Powderham Castle, Devon, with origins traced to the time of the Crusades. The first part described the cadet branch of the Courtenay family that participated in the crusades came to rule the County of Edessa, a Crusader state.