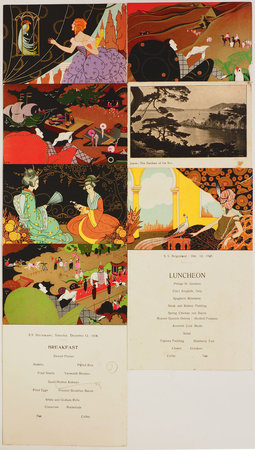 6 numbered menu cards, with detachable postcard illustrations (all intact) printed in gold and colours, 2 with printed menus (December 12, 1925) the others blank. Plus one additional card with detachable monochrome postcard of Japan. A few small spots but overall very fresh.

A very good set of art deco liner menu cards. S.S. Belgenland was the flagship of the Red Star Line and an icon of modernist luxury liner-style: Belfast-bulit and originally commissioned in 1917 as a British troop ship, it was refitted as an ocean cruiser. At 204 metres long, weighing 27,000 tonnes and carrying 2,700 it specialised in long distance and world cruises. Its most famous passenger was perhaps Albert Einstein, who travelled from New York to Antwerp in 1933, arriving in Europe to find Hitler had been made chancellor.