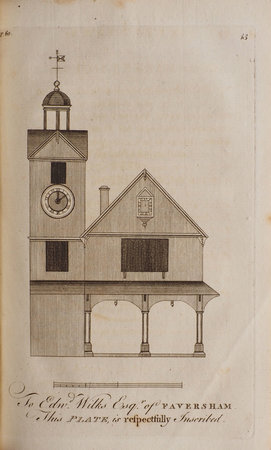 JACOB, Edward. ~ The history of the town and port of Faversham, in the county of Kent. By Edward Jacob, Esq. F.S.A. Illustrated with copper plates. London: for the author, by J. March; and sold by B. White, In Fleet-Street; L. Hawes, and Co. In Pater-Noster-Row; S. Patterson, In Essex-Street; and by S. Doorne, in Faversham, 1774.

First edition. Edward Jacob ‘antiquary and naturalist, was born in Canterbury, the eldest son of Edward Jacob (d. 1756), surgeon and alderman, who served as mayor of Canterbury in 1727–8, and Jane, daughter of Strangford Violl, vicar of Upminster. About 1735 he moved to Feversham [sic] where he lived at 78 Preston Street and practised as a surgeon, following in his father's and grandfather's footsteps. Among his patients was Lord Sondes of Lees Court, Sheldwich. The Jacobs were a long-established east Kent family and several members had served as mayors and magistrates in Sandwich and Dover. Actively interested in local affairs, Jacob was four times mayor of Faversham—in 1749, 1754, 1765, and 1775...

Jacob interested himself in the history of Faversham soon after he had moved there, ‘having an early propensity to the study of antiquities’. He was elected a fellow of the Society of Antiquaries on 5 June 1755, and in 1774 published The History of the Town and Port of Faversham, dedicated to Lord Sondes’ (Oxford DNB).

This is one of the standard copies with 15 plates, some having an 4 additional plates. With a good local provenance (Philip Neame, Faversham-born recipient of the Victoria Cross for service on the Western Front and of an Olympic gold medal in 1924, apparently the only recipient of both). Bibliotheca Cantiana 198-9.