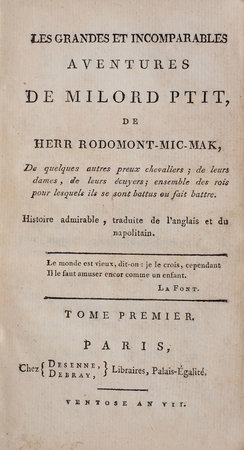 Sole edition of a substantial political satire on the calamity of the Revolution, a roman-a-clef with Pitt and the Austrian General Mack as major protagonists, masquerading as a novel translated from the English and ‘Naplotain’ (presumably ‘Napoleonic’ rather than Neapolitan). Rare. No copies located outside France. Gay II, 429.