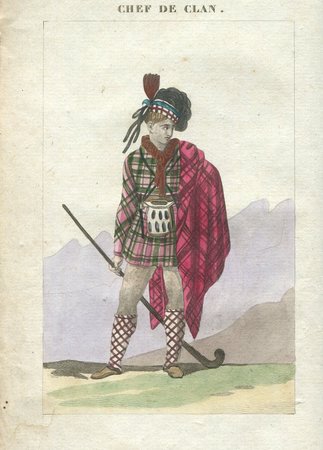 8vo, pp. 331, [1], plus three hand coloured engraved plates and folding map. Slightly spotted. Original wrappers (the upper repaired at corners and laid down) preserved in later quarter cloth. Bookplate of Pierre Munier. From the books of the late Martin Stone (1946-2016).

First edition. Novelist Nodier spent 50 days travelling the length of Britain to Scotland, where he took in Edinburgh, Glasgow, Dumbarton, Loch Lomond, Loch Katrine and Loch Long and was impressed by the romantic and gothic aspects of landscape and architecture. In England he visited Brighton, London, Richmond and Oxford taking in sights and museums. He was probably the first (of many) Frenchmen to take notice of the paintings of John Constable, having seen the The Hay Wain at the 1821 academy exhibition, including a rhapsodic report here (pp. 84-9).