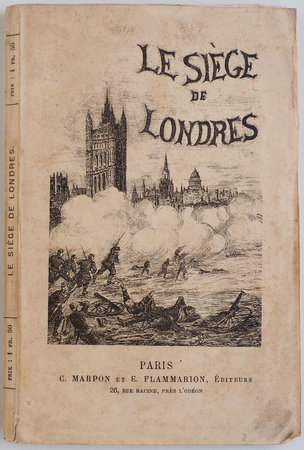 A very rare translation of the pseudonymous Siege of London (1885), probably the first edition in French (a condensed French edition also appeared in 1885). An excellent example of the many British speculative novels spawned by the fear of invasion, from the 1871 Siege of Dorking to Erskine Childers’s Riddle of the Sands (1903). In Posteritas’ account, the invasion is set against the background of a collapsed Gladstone Liberal government and crisis in the Middle East. The French invade via Portsmouth and later Dover and Scotland, with the aid of the perfidious Irish, and the novel culminates with the bombardment of Westminster and the Battle of Hyde Park.