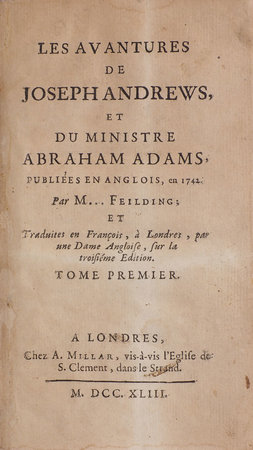 First edition in French? Both ESTC and Rochedieu note 2 issues of 1743 with false Millar imprints. Rochedieu notes one in 16mo and one in 12mo, while ESTC describes both as 12mo. This copy is of ESTC N15027, suggested as earlier than the other issue. Translated by Pierre François Guyot Desfontaines (not by the “Dame Anglaise” given in the title); a key figure in establishing the popularity of the English novel in France. Rochedieu 107.