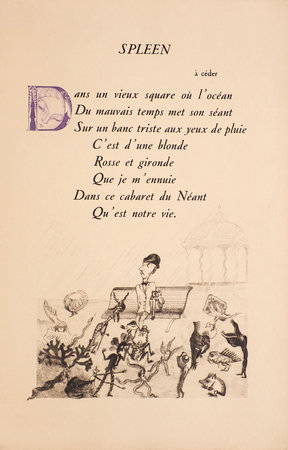 Small folio (320 × 200 mm), pp. [32], including title page in green and black, etched illustrations and coloured decorated initials throughout. Some offsetting from the darkest impressions, title rather browned. Uncut and loose, as issued in original green silk lined portfolio with ties and gilt seahorse emblem to upper cover. Sightly faded but a good copy. From the books of the late Martin Stone (1946-2016).

FIRST EDITION with Marie Monnier’s illustrarions. A celebrated verse collection by the Symbolist Léon-Paul Fargue (1876-1947), first published in the March 1923 edition of Adrienne Monnier’s journal Intentions and set to music by Erik Satie.

Fargue was the quintessential flâneur-poet of the early century. By the age of nineteen he had published works in L’Art littéraire and was a member of the ‘Apaches’, where he made lifelong friends with Ravel, who set his poem ‘Rêves’ to music in 1927. He was considered by contemporaries (including Walter Benjamin, Joyce and Rilke) as one of the foremost French poets of his day. Marie Monnier, illustrator of this edition, was the younger sister to female bookseller, writer and publisher Adrienne Monnier. Born into a progressive and open-minded family, she and her sister were often taken to the theatre and were encouraged to read widely from an early age. Marie’s illustrations for Les Ludions include many strange metamorphic beasts crowding margins and initials, like surrealist grotesques from an illuminated manuscript, or from the backgrounds of a Hieronymous Bosch. Witty and subversive, they are worth a very careful look.

This copy is number 113 of 190 copies on Hollande Van gelder (total edition 237). Not in Carteret