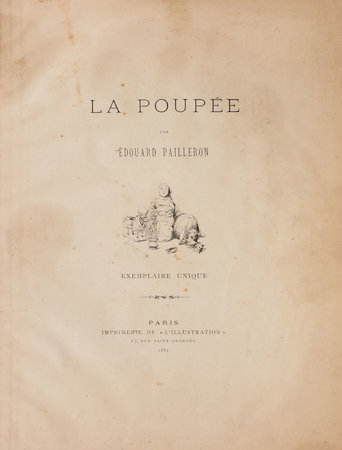 First edition: A children’s story written for the author’s daughter and her doll: ‘Exemplaire unique’, but actually one of two recorded copies (the other in the Bibliothèque nationale). Pailleron was a prolific and successful literary figure in Paris, as co-director of the Revue des Deux mondes and author of many plays. The Bibliothèque nationale copy contains an inscription permitting the recipient (presumably the printer or editor) to print one more copy only (presumably this one). Several later editions followed, but we can find no more examples of the first. Young Marie-Louise Pailleron appears (with her brother) as the co-subject in John Singer Sargent’s first dual portrait, painted in 1880 (she later recorded that she made no less than 83 sittings for it). Not in Carteret.