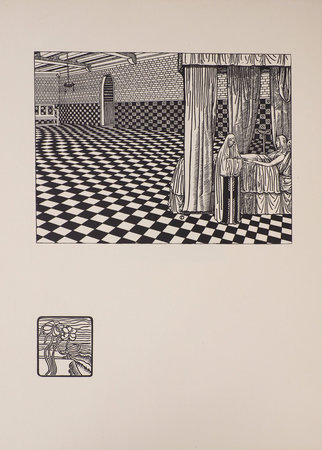 ONE OF 75 COPIES on Arches. This is the second edition, the first having been printed in oblong format in 1896 without the 12 additional woodcut scenes here. (Example number 91, one 75 copies on Arches, numbered 26 to 100 (there are a further 25 copies on japon nacré blanc à la cuve. Total edition 100).

The Douze Chansons are superbly interpreted in great detail here by Doudelet, an artist who began his professional career after a chance encounter with the prolific photographer Edmond Sacré, who managed to get him a job at the university of Ghent. He worked under the Bacteriologist Emile Van Ermengem, producing the immensely detailed microscopic scientific drawings. Doudelet met Maeterlinck through Louis de Busscher, son of a well-known editor, who invited him to attend a meeting with a group of young writers who wanted to create a new literary magazine. Their first artistic interactions began when Maeterlinck asked the artist to paint six mural paintings for his family chateau in 1895, then, when artist George Minne failed to deliver illustrations for Douze Chansons he asked for Doudelet to illustrate the work. Maeterlinck described the work as ‘un chef-d’oeuvre tout court; synchronisation, harmonie parfaite entre le poète et les images creées par son intreprète’.