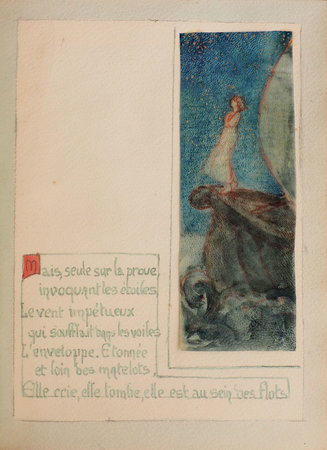 Small 4to (205 × 145 mm). 9 leaves, manuscript in pencil and watercolour on paper, with 11 miniatures painted on vellum, mounted. Original silk and vellum covered boards. Expert repair to spine and edges. From the books of the late Martin Stone (1946-2016).

A beguiling anonymous illustrated manuscript with painted miniatures on vellum. The text is a poem by French poet of Greek and Franco-Levantine origin, Chénier (1762-94) who perished under the guillotine during the Terror. Praised as a precursor of the Romantics, his work was rediscovered and published during the nineteeth century. His exotic subjects, coupled with his tragic end made him a favourite among devotees of the decadent.