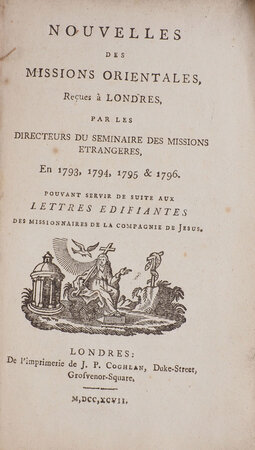 First edition. Reports from Tonkin, Cochinchina (parts of modern Vietnam) and China by missionaries of the the Séminaire des Missions étrangères de Paris, whose directors were then in exile in London. These letters (all dated) are first hand accounts by the bishops and other missionaries in the Far Eastern provinces and include numerous descriptions of local religion and custom, as a well as (sometimes violent) measures taken by Westerners against them. Printer James Coghlan (?1731-1800), originally a book binder, became the pre-eminent Catholic printer, publisher and bookseller in London in the last quarter of the eighteenth century, having taken over the stock of Thomas Meighan in 1774. ESTC: Cornell only in North America. CCFr: Ecole française d’Extrême-Orient, Paris only.