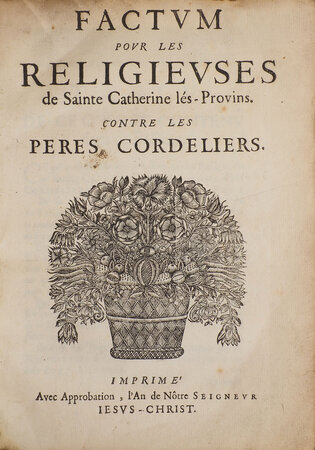 Two works bound together, 4to (230 × 160 mm). Some browning and dustsoiling. Contemporary limp vellum. Soiled and cockled, but a pleasing and unsophisticated volume.,

First editions of two significant anticlerical polemics. Factum pour les religieuses de Sainte-Catherine-lès-Provins is a celebrated example of the power of popular print over conventional legal process. In the 1660s a faction of nuns at Saint-Catherine sought to overthrow the tyranny of their abbess who was in league with the local Franciscans. Unable to access regular legal channels (as women and nuns) they appealed directly to the local parlement with this devastating Factum detailing a host of abuses committed by the Franciscans in their convent. The Factum was ‘purportedly addressed to their judges but intended for broad public distribution. In it they charged that the Franciscans ran Sainte-Catherine as a personal brothel, seducing and sometimes physically forcing the nuns into sexual relationships with friars while simultaneously plundering the convent’s treasury. The titillating Factum pour les religieuses de Sainte-Catherine-lès-Provins contre les pères cordeliers told a story that borrowed narrative inspiration from contemporary novels and pornography. It quickly became a sensation. The Franciscan order denounced the work as an illegal defamatory libel, and most copies of the original appear to have been seized and burned. But the Factum was quickly bootlegged, became a hot commodity in the clandestine book trade and earned, from the evidence of its multiple editions, a very broad readership (Tuttle). Indeed, several early editions survive, almost all issued without genuine imprints, and the first edition is extremely rare. Among the nuns’ many complaints is the accusation that friars brought pornographic books into the convent including Maximes d'amour, L’Ecole des filles and Catechisme d’amour and that one of them supplied a novice with a cipher to ‘write filth’ (pour écrire des ordures).