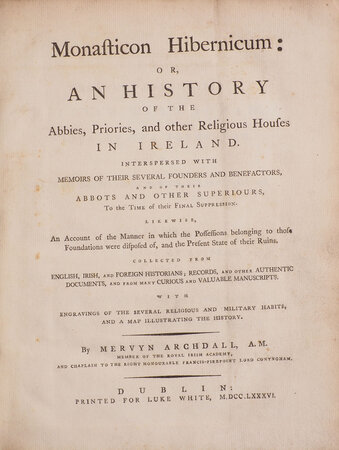 ARCHDALL, Mervyn. ~ Monasticon Hibernicum: or, An History of the Abbies, Priories, and other religious Houses in Ireland. : Interspersed with Memoirs of their several Founders and Benefactors, and of their Abbots and other Superiours, to the Time of their final Suppression. Likewise, an Account of the Manner in which the Possessions belonging to those Foundations were disposed of, and the present State of their Ruins. Collected from English, Irish, and foreign Historians, Records, and other authentic Documents, and from many curious and valuable Manuscripts. With Engravings of the several eligious and military Habits, and a Map illustrating the History. Dublin: for Luke White, 1786.

First edition of this encyclopedia of pre-Reformation monasteries, nunneries and abbeys in Ireland, describing some 550 foundations — the fruit of forty years research by the Dublin antiquary Archdall. The preliminaries include a list of subscribers (including numerous ecclesiastical figures and several booksellers) and a pasted slip adds several more. The plates of the ‘religious and military habits’ (including three nuns: Augustinian, Bridgitine. and Benedictine, a knight templar and a knight of St John of Jerusalem) are derived from James Ware’s Works, 1739-46. The work was also issued in London in the same year. ‘A comment in the review published in the Gentleman's Magazine—'We sincerely congratulate the sister kingdom on such a compilation' (GM, 1786)—suggests that he was keen to provide Ireland with a monastic history comparable to William Dugdale's Monasticon Anglicanum’ (Oxford DNB). Very scarce.