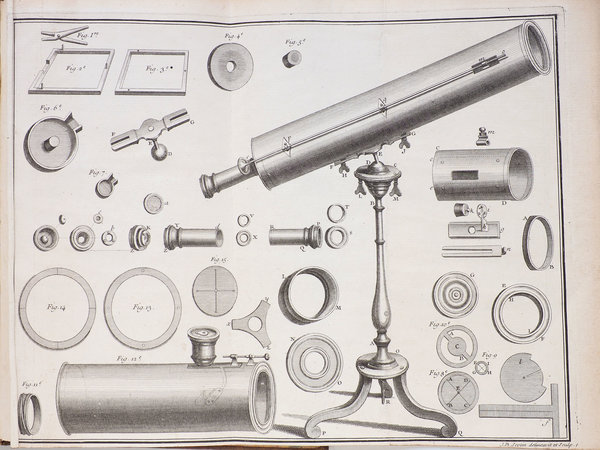 First edition of this important early treatise on the practical construction of the reflecting telescope. It is precisely contemporary with Robert Smith’s System of Opticks (also 1738) and both books share credit as the first manuals devoted to the construction of this instrument. Later editions, with the title Construction d’un telescope par reflexion de Mr. Newton, appeared in 1741 and 1756.

The reflecting telescope is generally attributed to Isaac Newton who built one in 1668. However, due to the extreme difficulty of producing mirrors of sufficient quality, his telescope was not widely adopted until the 1720s and 1730s when British instrument makers began to produce finely polished metal mirrors and the reflecting telescope became a practical reality for European astronomers. Passemant, one of the most celebrated instrument makers of his age, later Ingénieur du Roy, built several to the design depicted in the folding plate here. cf. Babson, Newton Collection, 157, (describing the 1741 edition only, now in the Huntington Library) ‘Passemant was a Frenchman who lived in Geneva and constructed not only telescopes, but also astronomical clocks and other instruments. This rare book contains many trade secrets’.