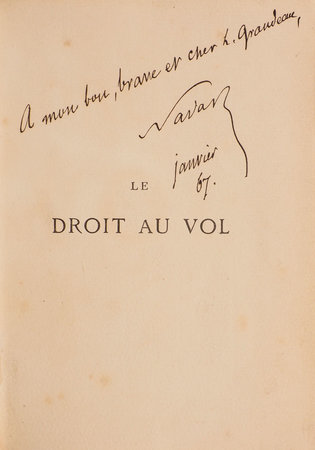 FIRST ISSUE WITH THE PREFACE BY GEORGE SAND, ONE OF THE FEW COPIES ON HOLLANDE; A PRESENTATION COPY, inscribed to Louis Grandeau French chemist and professor at Nancy University. Le Droit au vol is Nadar’s important polemic advocating the development of heavier-than-air flight. Two years before, Nadar had commissioned and experimented with the balloon Géant, whose maiden flight had carried Jules Verne (among others) but whose alarming crash landing on a subsequent flight inspired Nadar to look towards aircraft other than balloons. He founded the Société d’encouragement de la navigation aérienne au moyen du plus lourd que l’air. The relationship between Dadar and Sand was longstanding: he had dedicated his collection Quand j’étais étudiant to her in 1856, and all the well-known images of her were taken by him. She was an enthusiastic supporter of his aerial endeavours.

This is the third of three issues appearing in 1865: the first two have only Nadar’s preface, while the third also contains an enthusiastic Preface by Sand. Though the publisher referred to these as distinct editions, it is more likely that they were simply re-issues of the same sheets with modified preliminaries.