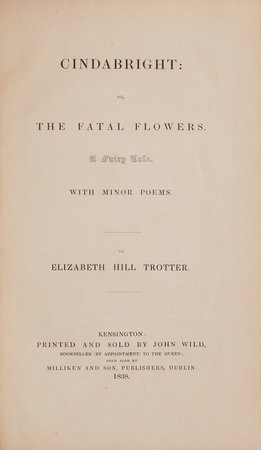 TROTTER, Elizabeth Hill. ~ Cindabright: Or, the Fatal Flowers. A Fairy Tale. With Minor Poems … Kensington: Printed and Sold by John Wild, Bookseller (by Appointment) to the Queen; Sold also by Milliken and Son, Publishers, Dublin. 1838.

First edition, extremely scarce, of this dramatic allegory of Anglo-Irish relations.
Trotter’s is a grown-up fairy tale, a masque-like play in which the dramatis personae are given both dramatic and Spenserian allegorical names. The Queen becomes England, Judith is Ireland and the eponymous Cindabright is also the Irish Patriot. A lengthy note explains that Judith’s dialogue references ‘the past state of a country abandoned to all the disadvantages of exclusion from a share in the social and political happiness and prosperity’. Trotter uses to explore a Spenserian world in which Ireland has recourse to question its historical treatment by the English.
Trotter believes in the merit of fairies, which here represent Sentiment; she likes ‘their mystified nothings, through which we may detect beautiful wit at times’. In a common refrain over the loss of innocence, Trotter prefixes Cindabright by wondering, ‘Have the wonderful discoveries of modern science put to flight our pleasant fairies, with all their train of fancy play?’ Ultimately, Trotter need not have worried that ‘giant steam, with his real wonders’ would overpowered the products of make believe, for alongside the industrial revolution developed the peculiar Victorian preoccupation with fairies, most obviously articulated in era’s relative profusion of fairy paintings and stories. Seldom however are these corralled into patriotic invective, as here. Just three copies recorded. COPAC lists just two copies in the UK, both at the British Library, to which WorldCat adds one in the US, at Princeton. Not in Jackson, nor Jackson, Women.