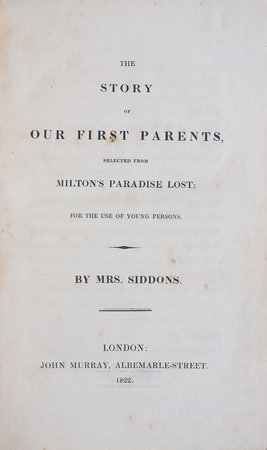 SIDDONS, Sarah. ~ The Story of our first Parents, selected from Milton’s Paradise Lost: For the use of young Persons … London: John Murray … 1822.

First edition. An abridgement for children of Milton’s account of Adam and Eve, by the celebrated actress Sarah Siddons (1755-1831).

Siddons’ admiration for Milton was lifelong: ‘By the age of ten she was already responsive to the poetry of Milton … Perhaps his curious combination of sensuality and austerity gave particular satisfaction to this girl who, as a woman said that she feared to play Shakespeare’s Cleopatra as she should be played’. After her official retirement in 1813, Siddons gave frequent dramatic readings of Milton and Shakespeare – as represented by Lawrence’s portrait of her with works by both authors – and Paradise Lost was her preferred text. Manvell suggests that Milton’s ‘strong dramatic sense and the grandeur of his rhetoric must have excited her’, but Siddons also saw the merits of his material for a juvenile audience. As she describes in the Preface to the present work, she completed her abridgements for the use of her own children that they might develop ‘an early admiration’ of Milton, and now chooses to issue them for public consumption.
The work provoked particular invective from the London Magazine, which acknowledged Siddons’ greatness but was aggravated by her Miltonian foray: ‘could she really condescend to become an authoress on the strength of an eighteen-penny copy of paradise lost and a pair of scissors?’ The reviewer accuses John Murray of being blinded by Siddons’ fame in his agreement to publish the work.
The Story of our first Parents was issued in the same year under the separate title, Abridgement of Paradise Lost, which is identical in every other respect. Perhaps the variants were intended to appeal to separate adult and juvenile audiences. See: Roger Manvell, Sarah Siddons: Portrait of an Actress, (Heinemann, 1970) pp. 12-13. Not in Jackson, nor Jackson, Women.