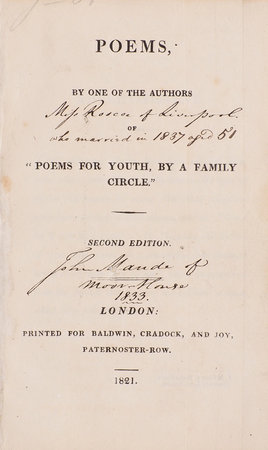 [ROSCOE, Jane Elizabeth]. ~ Poems, by one of the Authors of ‘Poems for Youth, by a Family Circle.’ Second Edition. London: Printed for Baldwin, Cradock, and Joy … 1821.

Second edition (first published 1820). A diminutive volume of elegant verse by Liverpudlian poet and anti-slavery campaigner Jane Elizabeth Roscoe (1797-1853).
Roscoe belonged to an active artistic and literary family. Her father William (1753-1831) was one of the founders of Liverpool’s first Society of Encouragement of the Arts, Painting and Design, which organized the first public exhibition of paintings held in any English town outside London. He was also an abolitionist, and later became one of nineteenth century’s foremost historians of Renaissance Italy. In keeping with her siblings, all of whom engaged in literary activities, Jane Elizabeth contributed to the two-volume Poems for Youth by a Family Circle (1820-1821) and was inspired by its modest success to print a small volume of her own verse, of which the present work is the second edition.
As the contemporary annotations assert, Roscoe married Unitarian minister Francis Hornblower (1812-1853) in 1838, although the assertion here that she was 51 at the time of her marriage is incorrect. Roscoe remained actively involved with the anti-slavery movement, and would go on to contribute two sonnets to the Boston-based anti-slavery annual, The Liberty Bell.
The present work is identical to first edition, but for the title-page. COPAC records just one copy of this edition, at the British Library. Not in Jackson; Jackson, Women p. 280 (Roscoe 1 (b)).