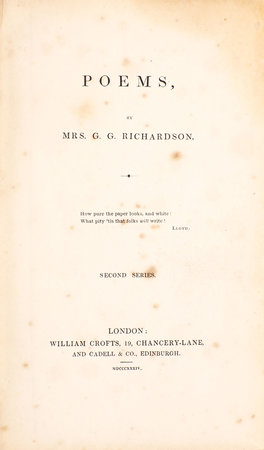 ‘Second state’, expanded from the first edition of 1828 and on large paper. An anthology by the Scottish-Indian poet Catherine Eliza Richardson (1777-1853).
Although often referred to as Caroline, Richardson was born Catherine Eliza Scott in Canobie, Dumfrieshire. At twenty-two she travelled to India, whereupon she met and married her cousin Gilbert Geddes Richardson. She lived in Madras for her entire married life and for twelve years after her husband’s death, returning to Scotland in 1827 to take solace in ‘the company of her nearest remaining friends, and in the rural scenes which had been dear to her since childhood’. These ‘rural scenes’ dominate the present work, to the extent that her Indian experiences are eclipsed almost entirely by the Romantic iconography of the borders and minstrelsy. Verses such as ‘Kirk-Maiden of Galloway’ and ‘Lines for the Anniversary of Burns’ pleased contemporary reviewers; Chambers’ Edinburgh Journal praised Richardson’s ‘striking originality of thought’.
First, second and third editions of Poems appeared in the first year of publication, each with amendments. This ‘second series’ is a more luxurious production, on larger paper of a superior quality, and with a handful of new poems. Not found in COPAC. WorldCat records eight copies, at the British Library, Bodley, Birmingham, Cambridge, Glasgow, National Library of Scotland, St. Andrews, Dumfries and Galloway. Jackson 582; Jackson, Women p. 268.