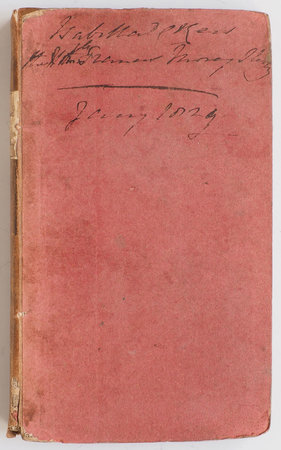 First edition of the first published work by successful poet Caroline Norton (1808-1877).
Norton had a significant literary pedigree; her mother was the novelist Caroline Henrietta Callender (1779–1851), and her paternal grandparents were the dramatist Richard Brinsley Sheridan and his first wife, the celebrated singer Elizabeth Linley. In 1827 Norton made what would prove to be an unhappy marriage to George Norton M.P., and ‘disliking and disliked by his family, threw herself into literary society’ (ODNB).
The Sorrows of Rosalie was Norton’s first published work. Even by the accepted standards of cautionary tales, the eponymous heroine suffers particular hardship. Rosalie is persuaded by her lover to abandon her aged father, but the lover – a villain – deserts her soon after. With illegitimate child in tow she seeks her betrayer in London, but is forced to abandon the search and returns to her father’s house, only to find him dead. Maddened by grief and the needs of her starving child, Rosalie is driven to theft, whereupon she is imprisoned and, although she is ultimately acquitted, her child dies in prison. After much despair, she finds refuge in a remote part of the country where she devotes the remainder of her life to quiet contemplation.
The work was widely reviewed; the Literary Gazette wrote, ‘there is nothing very intricate in the story of the Sorrows of Rosalie’ yet ‘these slender materials have been worked into a tale of intense and Crabbe-like pathos’. The Morning Post asserted that ‘simple, unaffected, and beautiful effusion will be perused and re-perused with still encreasing [sic] pleasure’. The New Monthly Magazine addressed the author’s gender: ‘The present little work is attributed to the pen of a lady. Were it not for the fair, we should have but little new poetry now-a-days. Mrs. Hemans, Miss Landon, Mrs. Howitt, Miss Browne, and others of the beau sex, have all a woman’s constancy for the Muse, and do not desert the worship because it does not happen, just at present, to be the ton’.
Identifying the edition of The Sorrows of Rosalie is complicated. The British Library has two editions; the present imprint and one in a different state with alternative pagination, as well as a ‘fourth edition’, which appeared in the same year as the first.. Jackson recognises that the presence of the fourth suggests the presence of second and third states, but these have not been identified. The present work is identical to the British Library copy first edition. Jackson 548; Jackson, Women p. 243 (Norton 1 (a)).