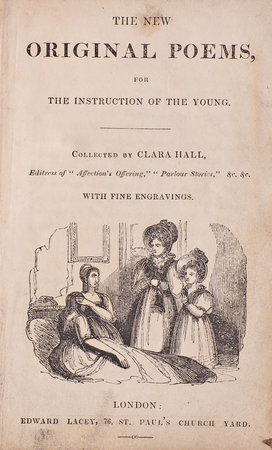 [JUVENILE.] ~ The New original Poems, for the Instruction of the Young. Collected by Clara Hall … With fine Engravings. London: Edward Lacey … [c. 1835].

First edition, rare, of this book of forty poems for children.
The poems herein Include ‘Hymn’ by Amelia Opie (1769-1853), ‘The Angels’ Call’ by Felicia Hemans, ‘The Irish Maiden’s Song’ by Bernard Barton (1784-1849), ‘To My infant Boy’ by the Scottish novelist Leitch Ritchie (1800-1865), and ‘Youth’ by William Howitt, amongst others, as well as works anonymous on devotional themes. In her Preface, Hall explains that she was driven to choose largely devotional material, which ‘is selected (by the kind permission of friends) from various sources, for which [she begs] ‘most respectfully to thank all, as well as for some new contributions’.
The first of the charming illustrations is the frontispiece vignette representation of ‘The Orphan’s Prayer’, after a poem in the volume by the Rev. Henry Stebbing. COPAC lists just one copy, at Bodley. Not in Jackson; Jackson, Women, p. 82; Osborne ii 642.