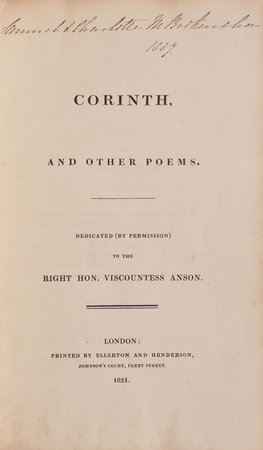 [EARLE, Miss]. ~ Corinth, and other Poems. Dedicated (by Permission) to the Right Hon. Viscountess Anson. London: Printed by Ellerton and Henderson … 1821.

First edition, scarce.
The three decades following the publication of Byron’s narrative poem ‘The Siege of Corinth’ (1816) saw a profusion of dramatic and poetic reinterpretations, but this is one of the first (it predates Charlotte de Humboldt’s Corinth, A Tragedy by seventeen years). It is also one of the most original, for whilst Earle touches on Byron’s subject—the Ottoman massacre of the Venetian garrison at Corinth—Earle covers a much broader range of Corinthian history. She opens with an account of the 7th Century BCE tyrant Cypselus, before proceeding to outline the gradual moral decline of the city-state, before the arrival of Paul with his promise of salvation. The tone of the collection is devout, and moralising, but Earle wears her classical learning lightly and the poems are elucidated by useful contextualising notes.
The other works include the charmingly-titled ‘Impromptu on a Nosegay of Roses’, as well as ‘Epistle from Bonaparte to Maria Louisa’ and ‘The Maniac’s Tale’. The thirteen-page List of Subscribers includes the Archbishop of York. COPAC records six copies, at The British Library, Bodley, Cambridge, Leeds, The National Trust and Aberdeen, to which WorldCat adds Indiana and Yale. Not in Jackson; Jackson, Women p. 113.