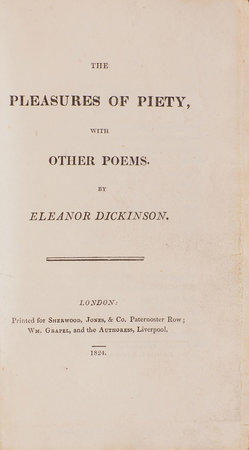 DICKINSON, Eleanor. ~ The Pleasures of Piety, with other Poems … London: Printed for Sherwood, Jones, & Co. … Wm. Grapel, and the Authoress, Liverpool. 1824.

First edition, very scarce, of this anthology of devotional verse by Irish-Liverpudlian Quaker poet Eleanor Dickinson (née Blakey).
Beginning with an invocation of the muses, The Pleasures of Piety covers a variety of spiritual issues. Dickinson applauds the Anglo-missionary tradition beginning with Augustine’s import of Christianity to Britain: ‘The land of Freedom hailed the dawning day, / And Superstition fled, with night, away’. She also versifies episodes from British ecclesiastical history, including the vicissitudes of the Reformation: ‘Triumphant Piety! 'twas thine to soar, / Beyond frail Nature in that dreadful hour; / When Latimer, and Ridley dear to Fame, / And Cranmer, braved serene, the fiery flame’.
For what is now a scarce work, Pleasures was widely reviewed upon publication. The Imperial Magazine described the work as ‘a very pleasant, mild, and pretty piece of religious writing, wherein are several well-turned lines, harmonious rhymes, and neat antitheses; but originality of design or illustration, is either totally lost sight of or despised’. The Literary Chronicle questioned the inclusion of Dickinson’s verse on the death of Lord Byron, which ‘says much for the liberality of the fair author, who … can appreciate genius, though not in the livery of her choice, nor very scrupulous as to its morality’. The Monthly Magazine, however, was kinder: ‘if the fair author … cannot pretend to genius, she lays fair claim to the character of taste, judgment, and moral feeling … Some passages in the Pleasures of Piety will bear a favourable comparison with the best didactic poetry of the day’.

Dickinson published just two volumes of verse; the present work was followed in 1830 by The Mamluk: A Poem. Both are scarce: COPAC records copies of the present work at only the British Library, Society of Friends and St. Andrews. Jackson p. 505; Jackson, Women p. 104.