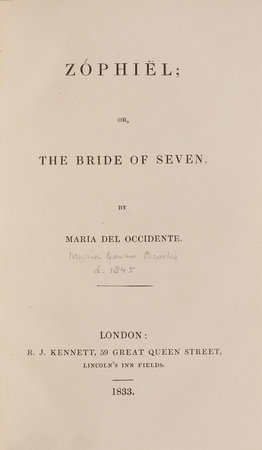 Small 8vo (160 x 100 mm), pp. viii, 261, [1]; occasional pencil lines in the margins; contemporary tan half calf and marbled boards, spine gilt in compartments with raised bands and contrasting label, marbled edges; corners scuffed, joints a little worn, some scratches to the leather at the head of the lower board; armorial bookplate of Henry Jeffreys Bushby and book label of Percival F. Hinton.

First English edition (first published in Boston in 1825). A narrative poem based on the story of Sara in the apocryphal Book of Tobit, by the Massachusettsan poet Maria Gowen Brooks (1794-1845).
It was during a visit to her brother’s Cuban coffee plantation that the recently widowed Gowen-Brooks composed the first canto of Zóphiël, which was published in 1825. In her Preface, Gowen-Brooks explains that she ‘endeavoured to adhere entirely to the belief (once prevalent among the fathers of the Greek and Roman churches), which supposes that the oracles of antiquity were delivered by dæmons or fallen angels, who wandered about the earth’. Zóphiël is one such, a complex protagonist who is likened to both Apollo and Lucifer in his pursuit of the virtuous Hebrew maiden Egla.
This edition has a dedicatory poem to Robert Southey, with whom Gowen-Brooks began a correspondence in 1826, and with whom she lodged for several weeks in 1831 at his home in Keswick. Southey championed Gowen-Brooks, and undertook to supervise the publication of this edition upon her return to the US. He wrote to Caroline Bowles, ‘I do not know of any poet whose diction is so naturally good as Mrs. Brooks’s’ (Jackson, p. 40). Charles Lamb was entranced by the work, writing ‘Southey says it’s by some Yankee woman. As if there were any woman capable of creating anything so great!’. Not in Jackson; Jackson, Women p.40 (Brooks 2 (b)).