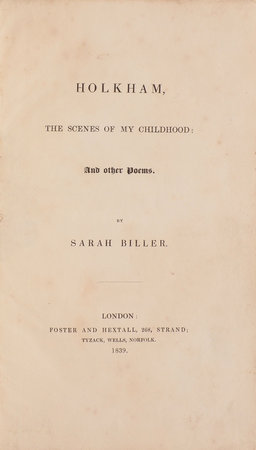 BILLER, Sarah. ~ Holkham, the Scenes of my Childhood: And other Poems … London: Foster and Hextall … Tyzack, Wells, Norfolk. 1839.

First edition, apparently very scarce, of this encomium to Holkham Hall and estate, by Norfolk-born poet Sarah Biller.
Remodelled in the eighteenth century for its owner Thomas Coke (1697-1759), Holkham is one of the finest examples of Palladian architecture in Britain. However, as Biller notes in her prefatory Address, ‘no other native of Holkham has made any poetical effort to describe it’. Biller’s intimacy with the topography of the estate goes beyond agriculture and husbandry to include praise of the house itself; the volume is dedicated to Holkham’s owner Thomas Coke, Earl of Leicester (1754-1842), and Biller is aware of his formidable collection of art and antiques, as well as his renowned library.
The other poems in the volume are on devotional topics, with the exception of ‘Lines on an aged Female’ which tells of an attempt to take a portrait of an elderly woman aged 104 which was scuppered because of the demise, not of the subject, but of the twenty-five year old painter. COPAC records copies of this first edition at the British Library and Edinburgh only, the second, published the same year, is similarly scarce.