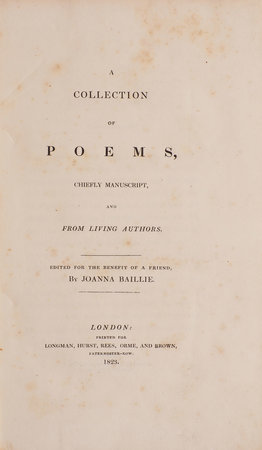 < >
‘THE CHARACTER AND SPIRIT OF THE AGE’

BAILLIE, Joanna. ~ A Collection of Poems, chiefly Manuscript, and from living Authors. Edited for the Benefit of a Friend … London: Printed for Longman, Hurst, Rees, Orme, and Brown … 1823.

First edition, in boards, of Joanna Baillie’s important Collection of Poems, which includes previously-unpublished works by some of the foremost poets of the day.
Successful playwright Joanna Baillie (1762-1851) published the Collection by subscription, in order to support a widowed school friend and her daughters. Baillie explained the situation in a letter to Lady Dacre, in 1822: ‘There is a friend and old schoolfellow of mine, who, after having been brought up in affluence and living in that state till within a few years of the present time, finds herself reduced to absolute poverty … I have offered to edit for her advantage a collection of poems in one volume, to be published by subscription. I wish the collection to be composed chiefly of MSS., or such pieces as have only been printed privately, and I am anxious that it should be in itself a creditable book, that I may not be accused of altogether picking people’s pockets for the benefit of my friend.’
The project was a success, as Baillie recognises in her prefatory address: ‘To her literary friends, who have so liberally, readily, and cheerfully supplied her with the manuscripts which compose this collection, she cannot too strongly express her obligations’. Indeed, Baillie’s popularity in literary circles is evident, for the pages of A Collection contain some of the most well-known poets of the day, including Barbauld, Fanshawe, Schiller (translated by Sotheby), Southey, and Wordsworth.
Most of the works in the volume were unpublished, although some had appeared in print. Anna Barbauld’s ‘On the King’s Illness’ first appeared in the Monthly Repository; three of Catherine Fanshawe’s contributions had been printed in the past decade; Thomas Campbell’s, ‘To the Rainbow’, had appeared in the New Monthly Magazine, the same issue that included Baillie’s ‘To a Boy’ (which itself reappears here). James Hyslop’s anonymous anapaestic contribution ‘Cameronian Dream’—which later became a staple of Scottish verse anthologies—had appeared in the Edinburgh Magazine and Literary Miscellany. These are exceptions however, and the vast majority of the pieces appear here for the first time, including two sonnets by Wordsworth and Southey’s ‘The Cataract of Lodore’. As perhaps befits its Scottish cause—Baillie’s beleaguered friend was a Scott—the volume opens with Walter Scott’s short play, ‘MacDuff’s Cross’, and closes with Baillie’s own borders-ballad ‘Sir Maurice’.
Although the volume was not published for wider sale, a number of journals reviewed A Collection. Blackwood’s Edinburgh Magazine quoted approvingly from John Merivale and John Marriott, whilst the Monthly Review and British Critic both gave high praise to Henry Galley Knight’s contribution. According to the Eclectic Review, ‘the most beautiful poems in the collection, decidedly, are from the pens either of females, or of scarcely known or anonymous writers … Such works as these shew, more than any half dozen splendid chef d’oeuvres, the character and spirit of the age’. Jackson p. 490; Jackson Women p. 77. For the full account of this publication, see Thomas McLean, “Donation and Collaboration: Joanna Baillie’s A Collection of Poems, Chiefly Manuscript, and From Living
Authors, April 1823” (2016) http://www.branchcollective.org/?ps_articles=thomas-mclean-donation-and-collaboration-joanna-baillies-acollection-of-poems-chiefly-manuscript-and-from-living-authors-april-1823
Thomas