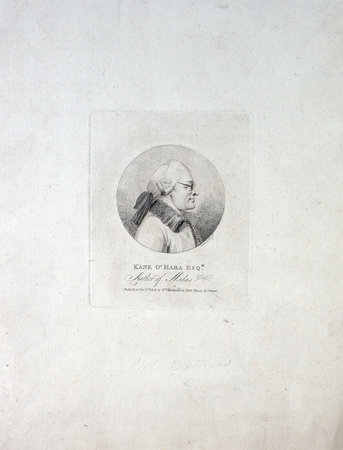 Kane O’Hara, Irish playwright (1711/12–1782), born at Templehouse in Connaught. ‘O’Hara’s first professional play was Midas, an English Burletta, which had its première production at the Crow Street Theatre, Dublin, on 22 January 1762. Midas was a clever, chauvinistic response to the success of a touring Italian troupe, the D'Amici family, which had brought a lively production of an Italian burletta to the Smock Alley Theatre on 19 December 1761. The Italian burletta, a slight comic opera already modish on the continent, captivated Dubliners with its simple domestic plot and brisk galante music’ (Oxford DNB). It transferred to London, became a hit and was performed there over 200 times by 1800. O’Hara was seriously shortsighted (he is seen here in spectacles) and lost his sight in 1778.

The etching by Edmund Dorrell (1778-1857) is comparatively rare, the plate apparently having been destroyed soon after it was first printed. This is a splendid example on a full sheet. O’Donoghue 25-II, 1802.