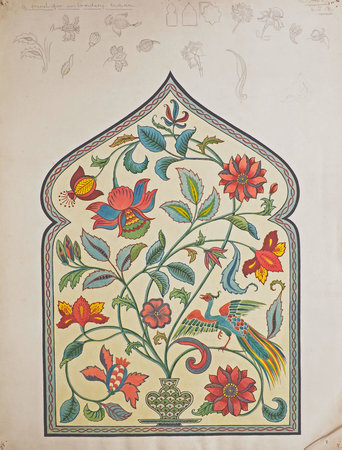 (DESIGN). HOW, Winifred. ~ A collection of ink, wash and pencil designs on 56 sheets, with some additional fabric and print samples. England, 1916-1926.

Ink, wash and pencil designs on 56 sheets, with some additional fabric and print samples. The sheets of varying sizes (the largest c. 550 × 380 mm). Manuscript captions and annotations in pencil. A few sheets folded, most with pinholes at each corner. Loose in a folder.

A design portfolio, mostly dating from the last years of the Great War: early work by a progressive young female designer, Winifred How, made at a so-far unidentified British college of art and design. The formal and informal elements of the collection, which includes many superb pencil and wash designs together with fabric and wallpaper samples, bridge the Arts and Crafts movement of the early century and a striking emergent modernism.

These spectacular designs are mostly formal exercises in pattern design, with an emphasis on the construction of repeating patterns, interchange, and counterchange (designs in which a certain colour of a motif and its ground are reversed in another part of the design). Also included are a number of more experimental designs, strikingly modernist, usually single panels, some elements of which are incorporated into the formal exercises. In several cases the time taken to make each sheet is noted (usually several hours), reflecting the commercial background of this formal training. The manuscript captions provide a key to each assignment, and some of the designs are marked with tutor’s comments (’good’, ‘beautiful’, excellent’, ‘all units too separate’, ‘good set but panel decoration has a sense of dropping at the centre’, ‘you want to try and get your units to unite’ etc).

She had evidently been a pupil of the progressive Margaret Morris dance movement. As a designer she provided musical notation and script for Eleanor and Harry Farjeon’s First (and Second) Chap-book of Rounds (1919 and 1920) and in the early 20s she contributed to the progressive magazine Form edited by Austin Osman Spare and W.H. Davies and Spare’s Golden Hind. It is likely she married in 1921. A letterpress flyer found among her designs here also provides a neat context for How’s workis for a benefit exhibition at Welwyn Garden City for the Women’s Committee for the Relief of Miner’s Wives & Children, at which pictures by Brangwyn, Nash, Rothenstein, Spencer and Fry were on sale.