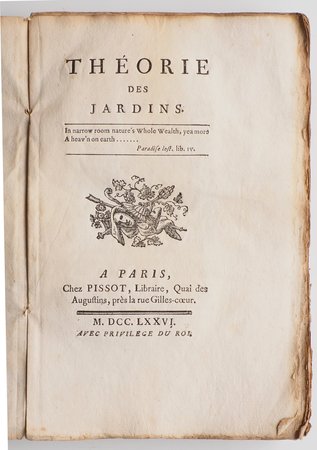 First edition of one of the most influential works of French garden theory in French. Morel was the father of landscape gardening in France, best known for the Théorie des Jardins and for his work with the marquis de Giradin in the celebrated garden at Ermenonville, and later at Malmaison. Morel never travelled to England, but was clearly influenced by theories of landscape being developed there. The title here bears a quote from Milton: ‘In narrow room nature’s Whole Wealth, yea more / A heav’n on earth...’ (Paradise Lost IV).