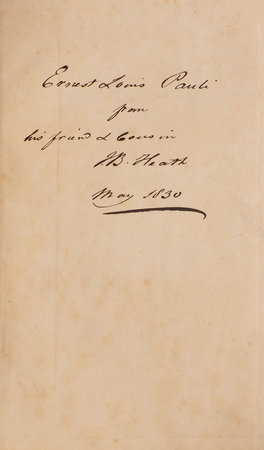 HEATH, John Benjamin. ~ Some Account of the Worshipful Company of Grocers, of the City of London. London ‘Not Published’, 1829.

First edition, privately printed, of this history of one of the pre-eminent London livery companies, founded in the fourteenth century, by members of the Guild of Pepperers, which dates from 1180. The Company was responsible for maintaining standards for the purity of spices and for the setting of certain weights and measures. Its members included London's pharmacists, who separated forming the Worshipful Society of Apothecaries in 1617. Some Account containing biographies of eminent members and an antiquarian account of Grocer’s Hall in the City of London. The author was Master of the Company until the year this work was published and is an interesting figure:

‘John Benjamin Heath attended Harrow School (1798–1806) and for a time was fag to Lord Byron. He then entered his father's business, and in 1816 was appointed consul-general for the kingdom of Sardinia, a reflection of the firm's commercial ties with northern Italy. During the first half of the nineteenth century Heath & Co. became an established part of the City. This can be traced through the positions held by John Benjamin Heath, who was chairman of both the London Life Association and the Society of Merchants Trading to the Continent; most importantly, he was a director of the Bank of England for fifty years...’ (Oxford DNB). Rare: OCLC locates no copies outside the UK.