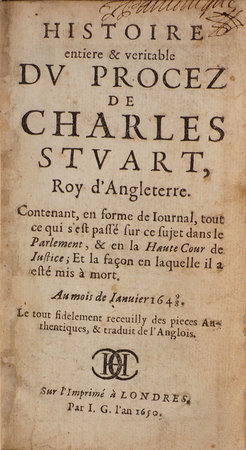 A very scarce London-printed account in French of the demise of Charles I. Three issues of 1650 are known, the other two being octavo with 155 pages plus prelims. ESTC assigns Wing number H2091 to both without further comment. The work was reprinted at Paris in 1792, an interesting anticipation of France’s own regicide in January 1793. Wing H2091; Thomason E.1353[1].