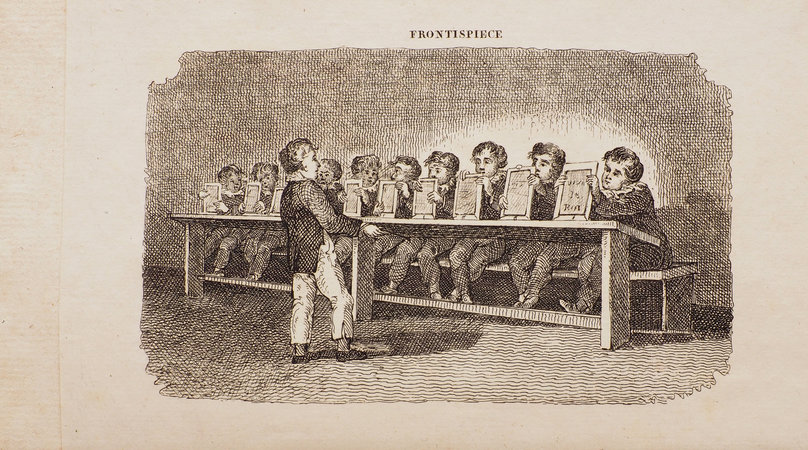 8vo (192 × 115 mm), pp. vi, [2], 110, including half-title, plus engraved frontispiece and 5 plates (one folding), verso of half-title signed by the publisher (against counterfeits). Uncut in original blue publisher’s boards with printed spine label. Rubbed, foot of spine rather worn, label chipped, but an excellent copy.

A very rare French translation of Lancaster’s The British System of Education (1810). In French, it is apparently preceded only by Système anglais dinstruction (1815) a translation by the duc de La Rochefoucauld-Liancourt, also rare. Lancaster’s ‘monitorial system’, in which huge groups of 100 pupils were educated in factory-inspired classes was widely adopted in Britain and the United State; with Dickens its most effective detractor (via the Coketown schoolrooms of Hard Times). The plates of this Brussels edition reproduce those of the English editions, with plans of the schoolroom workstations and plate illustrating group reading from a board (saving the purchase of books).

Born in London in 1778 the Quaker Joseph Lancaster founded several schools there, before introducing the system to North and South America. He died in New York in 1838 afer being run over by a carriage. Wolrdcat locates the Lyon and Amsterdam University Library copies only worldwide. COPAC adds no UK copies.