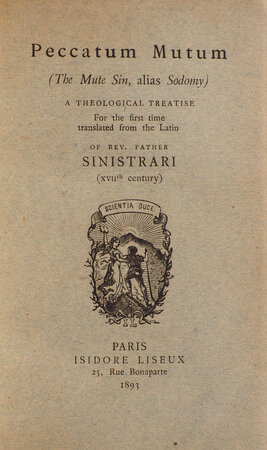 First edition in English, very scarce, a portion of Sinistrari’s De Delictis et Poenis Tractatus Absolutissimus (1700). The English title here finds an echo the following year with ’The love that dare not speak its name’ in Lord Alfred Douglas’s poem ‘Two Loves’ (1894), later discussed at length in the Wilde trial. Liseux was a pioneering figure in the publication of clandestine literature in English, working from Paris, but evidently supplying an English market. His publications were frequently scholarly texts in the history of sexuality and found their way onto the shelves of bibliophiles and collectors of erotica.