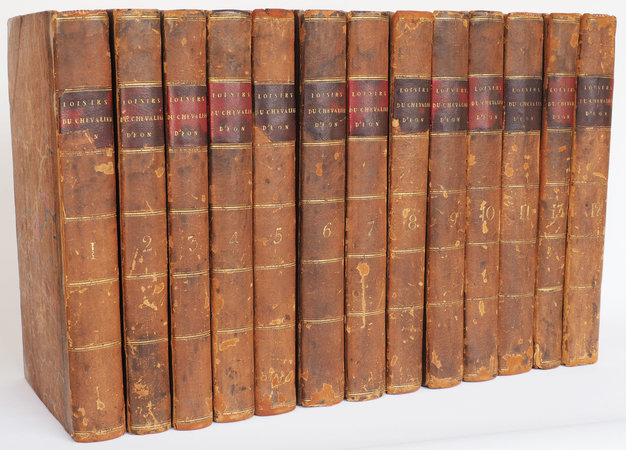 First edition of the Chevalier’s massive treatise on public administration largely composed in 1769, at the seat of his friend the fifth Earl Ferrers at Staunton Harald. Now disgraced as Louis XV’s secret foreign correspondent in England, D’Eon became a consistently colourful figure; his celebrity as a high-living transvestite sometimes obscuring his military, political and literary achievements. Throughout the 1770s in London, doubts were expressed about D’Éon’s sex, and wagers were made, although he himself professed to be indignant at the suggestion that he was not a man.

A volume is devoted to the commerce and affairs of Russia. Between 1755 and 1760 D’Eon had pursued a secret mission in Russia on behalf of the French government, aimed at establishing private lines of communication between Louis XV and the Empress Elizabeth. He was sent to London as a diplomat and spy in 1763, where his career initially flourished before he became entangled in the plots and rumours which were to bring him down. He became an expert in British statecraft, reflected in two of the volumes here. One of the British volumes in the collection is devoted partly to Scottish and partly American affairs.