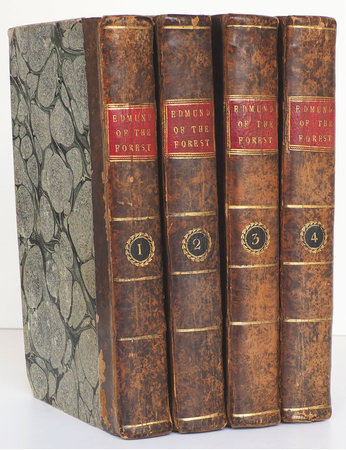 [MUSGRAVE, Agnes]. ~ Edmund of the Forest. An historical Novel. In four Volumes. By the Author of Cicely, or the Rose of Raby. London: for William Lane, Minerva Press, 1797.

First edition of this rare Minerva Press novel, an extravagant gothic tale set in medieval Scotland. A notice in the Critical Review of November 1797 was unable to identify its author positively but compared it with Musgrave’s first novel, Cicely (1795). ‘The author has allowed her or his imagination a wider scope, but has plunged into a series of adventures in rapid succession, which defy all possibility of belief... Horrors are multiplied on horrors, new characters on new characters, until the reader is bewildered in a maze... The story is supposed to have happened in the reign of James III. of Scotland; and the agency of witchcraft is introduced in compliment to that monarch’s credulity... The scene is, indeed, a copy from Macbeth’s visit to the witches; but it wants the additional charm of Shakespeare’s genius. With such helps as witches, ghosts, caverns, and ruined castles, we should be too scrupulous in expecting probability: but there are bounds even to fiction...’

Vol II contains a final advert for the second edition of Cicely, or the Rose of Raby, ‘just published’ [1796]. Unlike Cicely, Edmund did not receive a second edition, though it appeared in French in 1798/9 and an extract, entitled The Adventure James III of Scotland had with the weird Sisters was reprinted in the 1799 collection Gothic Stories. Indeed, more than one version of the story appeared in early nineteenth-century fiction, implying some influence. Blakey, p.181. Garside, Raven and Schöwerling 1797: 60. ESTC: British Library, New York Society Library, Rice University and University of Virginia only.