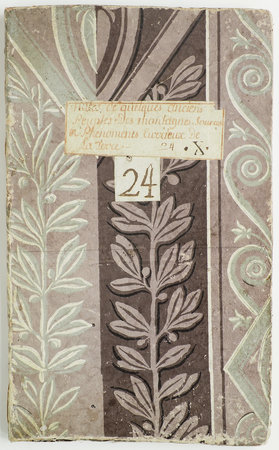 An idiosyncratic personal index of useful and curious facts, mainly geographical, in part forming an index to the Encyclopédie Méthodique (which had been issued in print without an index), a gazetteer to its Atlas, and an index to various other books, such as Valmont de Bomare’s Histoire Naturelle and Lacroix’s Géographie. A homespun affair, the volume is rather haphazardly arranged and presented in homemade boards covered in rather fine contemporary wallpaper. It includes references to regions, cities and landmarks in Europe, Asia, Africa and America (the latter including mentions of Cabot, Columbus and Penn) and several ingenious diagrams of the rivers of France.