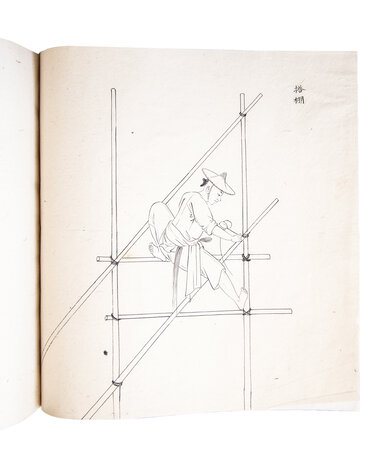 A splendid display of early nineteenth-century Chinese trades including craftspeople, a bookseller, purveyors of foods, medicines, fans, kites, toys and even a lion dancer, each drawing on one side of fine double-folded paper, captioned in ink in Chinese.

Albums such as these were produced in Chinese studios for the export market and were especially popular with Europeans for their exact portrayal of various aspects of Chinese life of the period: customs, costumes, occupations, flora and fauna. They ‘depicted those phases of Chinese life which fascinated the Westerner but defied descriptions to friends and family at home. Before the advent of the camera, this medium played an extremely vital role in revealing Oriental culture to the West.’ (Crossman, The China Trade, 1972). Though marketed to curious Europeans these albums represent important interpretations of Chinese life by indigenous Chinese artists. The present example is notable for being dated 1843, at the very end of the First Opium War just as five ports in China were being opened to the British.

These albums were luxury products, each one individually produced, and therefore priced beyond the means of any but the wealthy. Individual artists were never identified.

Lady Churchill, the original owner of the album, was born Lady Frances Fitzroy, the fifth daughter of Augustus Henry Fitzroy, third duke of Grafton. In 1801 she married Francis Almeric Spencer, youngest son of the fourth Duke of Marlborough and created first Baron Churchill of Wychwood in 1815. It is unlikely that the elderly Baron Churchill and his wife were in China at the time she received the album, and much more probable that it was presented to Lady Churchill in England as a gift, possibly by one of her military sons such as George Augustus Spencer, who was an officer in a regiment serving in China.