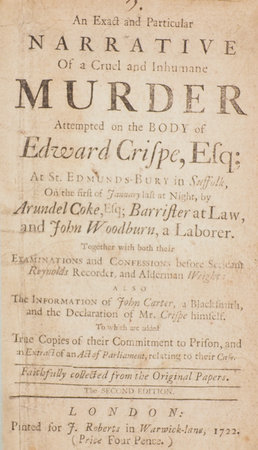 (CRISPE, Edward). ~ An exact and particular Narrative of a cruel and inhumane Murder attempted on the Body of Edward Crispe, Esq; at St. Edmunds-Bury in Suffolk, On the first of January last at Night, by Arundel Coke, Esq; Barrister at Law, and John Woodburn, a Laborer. Together with both their Examinations and Confessions before Serjeant Reynolds Recorder, and Alderman Wright: also The Information of John Carter, a Blacksmith, and the Declaration of Mr. Crispe himself. To which are added True Copies of their Commitment to Prison, and an Extract of an Act of Parliament, relating to their Case. Faithfully collected from the Original Papers. The second edition. London: Printed for J. Roberts in Warwick Lane, 1722.

8vo (180 × 110 mm), pp. 28. Title and final page quite soiled and creased, some thumbing an dampstaining elsewehere, but sound. Preserved in recent wrappers, to style.

Second edition. The defendant was the first to be executed under the so-called ‘Coventry Act’. Coke had attempted to kill Crispe in attempt to gain his fortune, but bungled the murder and succeeded only in slitting his victim’s nose. The Coventry Act of 1671 was cited in court (and is reproduced here): ‘That if any Person or Persons... on Purpose, and of Malice, Fore-thought, and by lying in Wait, shall unlawfully cut out or disable the Tongue, put out an Eye, slit the Nose, cut off a Nose or Lip or Member of any Subject of his Majesty... [they] shall be, and are hereby declared to be Felons, and shall suffer Death as in Cases of Felony.’ Coke argued that he had not intended to slit Crispe’s nose but to murder him, but was nonetheless hanged with his accomplice. Both editions rare: of the first ESTC locates the BL, Bodley, All Souls Oxford and Harvard copies; of the second: BL, Suffolk Record Office, McMaster and North Carolina.