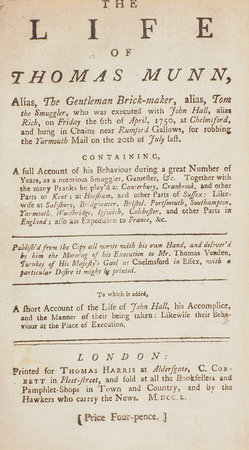 (MUNN, Thomas). ~ The Life of Thomas Munn, alias, the Gentleman Brick-Maker, alias, Tom 4he Smuggler, who was executed with John Hall, alias Rich, on Friday the 6th of April, 1750, at Chelmsford, and hung in Chains near Rumford Gallows, for robbing the Yarmouth Mail on the 20th of July last. Containing, A full Account of his Behaviour during a great Number of Years, as a notorious Smoggler, Gamester, &c. Together with the many Pranks he play’d at Canterbury, Cranbrook, and other Parts of Kent; at Horsham, and other Parts of Sussex: Likewise at Salisbury, Bridgwater, Bristol, Portsmouth, Southampton, Yarmouth, Woodbridge, Ipswich, Colchester, and other Parts in England; also his Expedition to France, &c. Publish’d from the Copy all wrote with his own Hand, and deliver’d by him the Morning of his Execution to Mr. Thomas Venden, Turnkey of His Majesty’s Gaol at Chelmsford in Essex, with a particular Desire it might be printed. To which is added, a short Account of the Life of John Hall, his Accomplice, and the Manner of their being taken: Likewise their Behaviour at the Place of Execution. London: Printed for Thomas Harris at Aldersgate, C. Corbett in Fleet-Street, and sold at all the Booksellers and Pamphlet-Shops in Town and Country, and by the Hawkers who carry the News, 1750.

First edition. A rare highwayman’s narrative, purporting to be an autobiography handed by Munn to the Yarmouth gaoler on the morning of his execution. Thomas Munn of Benenden and Canterbury was one of Kent’s less illustrious exports. From a relatively prosperous family of Kentish brick-makers he became notorious in Canterbury as a cheat and bogus wine merchant before decamping for Essex where he met his end; being hanged for robbing the Yarmouth mail. The first-person narrative contains many fascinating episodes, including the account of a same-sex encounter in a Southampton Inn. Munn was joined in bed by the son of the innkeeper on the pretext of keeping warm, who then admitted, ‘I love to lie with a naked man’ and began ‘to act a Part so Contradictory to Nature’ that Munn leapt up and threatened him with a penknife. He reflected: ‘It was what I never met with before, no since, but had Philosophy enough in me, to think it a pity to expose a young Man, tho’ he pointed at a very heinous Sin; and certainly we that commit Crimes beyond what is common, ought to be pitied, for no Man is certain if he comes under the same Temptation, that he shall be able to withstand it...’