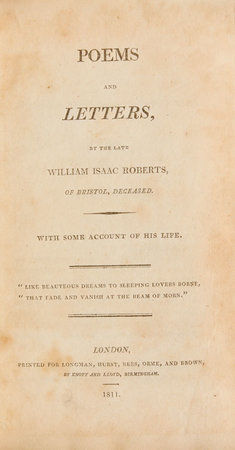 ROBERTS, William Isaac. ~ Poems and Letters, by the late William Isaac Roberts, of Bristol, deceased. With some Account of his Life … London: printed for Longman, Hurst, Rees, Orme, and Brown, by Knott and Lloyd, Birmingham, 1811.

First edition of the posthumously collected poems and letters of William Isaac Roberts, a precocious young poet who died at the age of twenty in 1806. Despite his youth, he was evidently able to earn the respect of a number of important writers of the day, including Robert Southey, who helped prepare the present edition and wrote glowingly of Roberts in his correspondence to Neville White in March 1810: ‘I want your assistance in a business in which I am sure it will interest you to give it. A youth of Bristol, by name William Roberts, died of consumption about two years ago, at the age of nineteen … The family had known better days … and one calamity following another, has reduced them very greatly … William was a youth of great genius, and a few days before his death he bequeathed his poems in trust to his two intimate friends to be published for the benefit of his sister, that being all he had to bequeath, and his passionate desire (like that of Chatterton) was to provide for her … My hope is that such a sum may be raised as will be sufficient to place Eliza Roberts in a situation respectably to support herself and her parents. I do not yet know what extent the publication will run to, but as soon as this is settled, I will beg you to beg subscriptions … certainly he was a youth of great genius and most uncommon promise, which it is my firm belief, founded upon the purity of his life and principles and the rectitude of his feelings, that he would amply have fulfilled, if it had not pleased God to remove him so early from this sphere of existence’ (Keswick, 11 March 1810).

The young poet’s tragic fate clearly resonated with readers, as the length of the subscription list attests (pp. xxxiii–liii; among them Edward Jenner, Thomas De Quincey, and William Roscoe), and is rendered doubly (R/r)omantic when coupled with the volume’s description of how his young love and poetic muse died at a tender age as well: ‘An interesting young lady, into whose society he was introduced during an excursion that he made so early as the year 1803, appears to have awakened in his bosom such emotions of tenderness and affection as death only could extinguish. Her subsequent illness and decease, on which he so feelingly expiates in some of his letters, puts a melancholy termination to his fondly cherished hopes’ (p. xvii). Johnson, p. 767; not in Jackson.