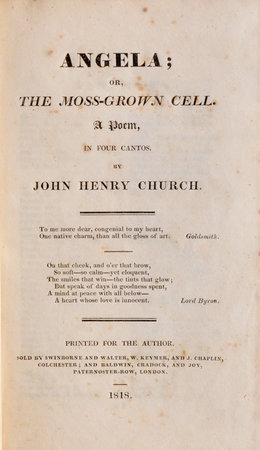 CHURCH, John Henry. ~ Angela; or, the Moss-grown Cell. A Poem, in four Cantos … Printed for the Author. Sold by Swinborne and Walter [Printers, Colchester], W. Keymer, and J. Chaplin, Colchester; and Baldwin, Cradock, and Joy … London. 1818.

8vo (187 × 109 mm), pp. xxiv, 108, including a substantial list of subscribers; some light spotting throughout; uncut in the original boards, some light marking and soiling, rebacked with plain paper, some neat repairs along the fore-edge.

FIRST AND ONLY EDITION of a provincial poem in four cantos aiming ‘To reward virtue and discourage vice’ (p. x) through its portrayal of the steadfast Angela, who earns herself a life of domestic felicity by being ‘an example to the sex, that true virtue is able to surmount all obstacles’ (p. xx). A quick read this poem is not, but do not fear, for as the author states in his preface, ‘the dull passages, may, by their contrast, heighten, and serve as a sort of foil to the more interesting ones!’ (p. xii). The preface, like the poem itself, does a great deal of moralizing, including a section condemning suicide (‘How weak—how mad! When a few short years,--a very few days,--nay, even moments, might summon him into the Awful Presence by a messenger from on high!’, p. xiv) and another praising women, though he makes sure to temper his admiration by reminding women their place (‘To the policy of a state, the female sex is in no small degree indebted’, p. xvi).

We have been able to find only one other poem by the author, ‘The Angler’, listed in a July 1819 issue of Blackwood’s Edinburgh Magazine, though we have been unable to locate any copies institutionally, in auction records, or on the market. Not in Jackson or Johnson.