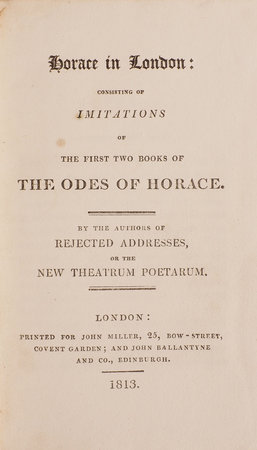 SMITH, James, and Horace SMITH. ~ Horace in London: consisting of Imitations of the first two Books of the Odes of Horace. By the Authors of Rejected Addresses, or the New Theatrum Poetarum. London: printed for John Miller … and John Ballantyne and Co., Edinburgh. 1813.

First collected edition, including odes to Walter Scott, Grimaldi, Kemble, Godwin, and Cobbett. Brothers James (1775–1839) and Horace (born Horatio, 1779–1849) Smith made their name as writers and humourists, and ‘shared a taste for wit, theatre, fashionable entertainments, and light verse. Horace Smith’s first literary ventures were novels of contemporary manners, characterised by lively dialogue … [both] contributed regularly to Hill’s Monthly Mirror, from 1807 to 1819, to William Combe’s short-lived magazine The Pic-Nic, and wrote several prefaces to plays in Cumberland’s new edition of Bell's British Theatre’ (Oxford DNB). The present edition was published by Millar to capitalise on the lasting success of the brothers’ highly popular parody Rejected Addresses (first published 1809), and contains poems mainly penned by James that appeared in Hill’s Monthly Mirror. A second volume was ostensibly planned but never published, so far as we can trace.

John Keats writes the following character sketch of the two brothers in a 23 January 1818 letter describing a dinner out: ‘They only served to convince me how superior humour is to wit, in respect to enjoyment. These men say things which make one start, without making one feel; they are all alike; their manners are alike; they all know fashionables; they have all a mannerism in their very eating and drinking, in their mere handling of a decanter.’ Jackson, p. 368.