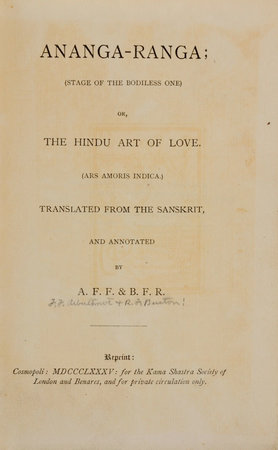 [BURTON, Richard Francis, Sir and Forster Fitzgerald ARBUTHNOT, translators]. ~ Ananga-ranga; (Stage of the bodiless One) or, The Hindu Art of Love. (Ars amoris indica.) Translated from the Sanskrit... ‘Reprint: Cosmopoli, MDCCCLXXXV for the Kama Shastra Society of London and Benares, and for private circulation only,’ 1885.

In 1873, Burton prepared an anonymous literal translation of the Kama-Shastra or The Hindoo Art of Love, of which only six copies were printed. It was planned to reissue the work in 1885, but only proofs appeared before plans for publication were abandoned. However, no less than three reprints appeared soon after, all bearing the date 1885.