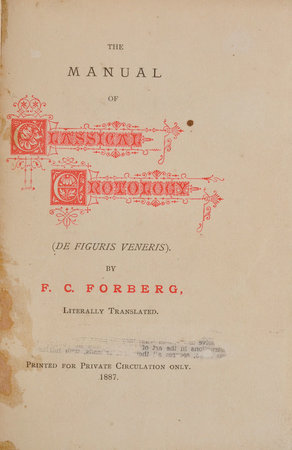 Not a Carrington imprint, but a popular pirate edition: a poor translation of the 1882 Liseux French text. Carrington, in describing his own scholarly edition, derides it in his catalogue Forbidden Books (1902, p. 58) saying that the Liseux edition ‘was immediately knocked into horrible English, and the French translation, which was bad, was rendered more faulty by its hurried transformation, when it was compressed into one dear little volume, and hawked about London in 1887.’

Carrington published some 300 titles (some using his own name and others using false imprints, as here) mainly in Paris where he lived from about 1894 until 1907, selling books from a shop in the Faubourg Montmartre. He notably printed a number of works by Oscar Wilde when few other publishers would risk implication in Wilde’s downfall and, besides outright pornography, he printed a number of editions of classical and oriental authors and important works on the psychology of sex. In 1907 he was deported from France for consistently publishing and selling literature “of a very obscene and vulgar character”. He continued his publishing business in Brussels before returning to Paris in 1912. By 1920 Carrington was blind from the effects of advanced syphilis, being admitted to the mental hospital at Ivry, south of Paris, where he died in 1921.