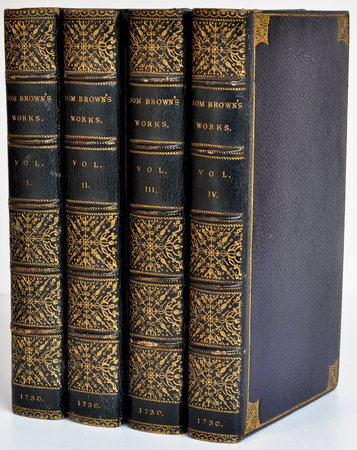 BROWN, Thomas. ~ The Works of Mr. Thomas Brown, serious and comical, in Prose and Verse. With his Remains, in four Volumes compleat. With the Life and Character of Mr. Brown, and his Writings, by James Drake, M.D. And a Key to the Whole. The seventh Edition carefully corrected. Adorned with a new Set of copper Plates. London: Printed by and for Edward Midwinter, at the Looking-Glass on London Bridge, 1730.

‘Facetious’ Brown’s Works are a splendid source for understanding lowlife in London, with zestful and witty accounts of tavern-life, gambling, music, prostitutes and criminals. The ‘new Set of Copper Plates’ are genuinely new to this edition, besides the frontispieces which had appeared in earlier editions. The collected works first appeared in 1707-11. The 1730 edition is apparently a reissue of the 1727 edition (it retains 1727 part titles in 3 volumes) with added titles and plates. It was printed by Midwinter on London Bridge at ‘The Looking-Glass’, a shop evidently used by more than one printer in the early eighteenth-century